Tales from a LGBT Mom living her best life with her two little girls and her amazing wife.

Hands down, one of the best perks of my advertising gig is that I travel to Walt Disney World in Orlando, Florida frequently.

Now even though I am not usually gallivanting through the Parks racking up laps on Space Mountain, all those trips do mean I do know a thing or two about staying in Disney Resorts. Which ones are the most convenient, which are the best themed and of course, which ones have the best food.

The big perk of staying at a Disney Resort on the monorail is that it’s uber-convenient to get to the one and only Magic Kingdom. Although all Disney Resorts offer free transportation to its four Theme Parks, there is something extra magical about boarding a monorail and being transported to the front gates of the Magic Kingdom. It still feels like utopian travel of the future, even though it was built in 1971.

Plus, the monorail is also faster and easier than the buses or boats if you want to take a siesta at the resort for a few hours in the middle of the day and head back to the Magic Kingdom later to catch the fireworks, so a Resort on the monorail would always be my top pick.

Grand Floridian: Set in the gilded age of Florida in the late 19th century, the Grand Floridian is a quintessential Disney hotel who’s signature red roof line can be seen from nearly anywhere on Bay Lake. It is by far the classiest of the resorts, with a full orchestra playing in the lobby each evening and some of the best restaurants on property. The Grand Floridian also offers a new, fully-equipped gym, 24-hour quick serve restaurant and is only one stop from the Magic Kingdom on the monorail. They also offer full spa and plenty of charming touches like the parasol parade. 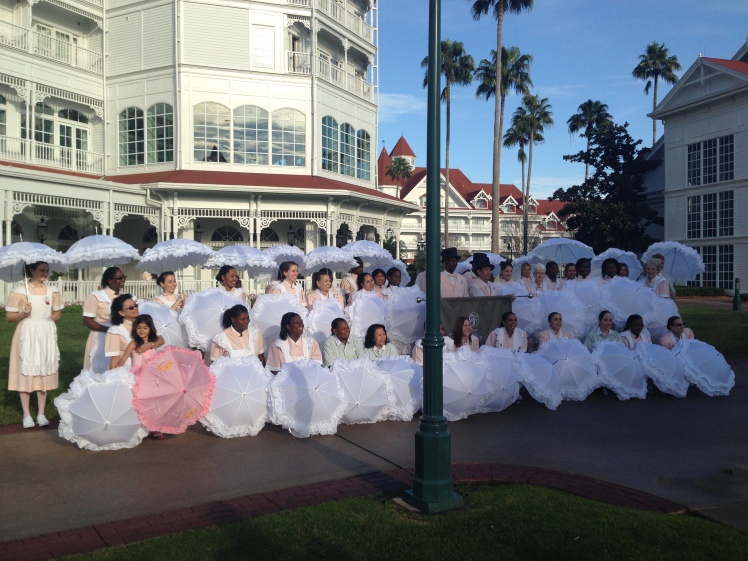 The Polynesian: Located next to the Grand Floridian and connected by a walking path is one of my favorite resorts, the Polynesian. This resort was inspired by one of Walt’s early trips to Hawaii and it drips with kitschy surf and tropical charm.

The resort recently underwent a facelift that spruced up the lobby, pools and added a Disney Vacation Club section to the Resort (oh those over-the-water bungalows!), but for any of you die-hard Poly fans, rest assured it still smells a bit like a humid Hawaiian hotel, boasts a nightly family luau and my favorite, coffee bar by day, sushi bar by night called Kona Cafe. It also is the only place outside of the Magic Kingdom and Disneyland where you can get a soft serve Dole Whip, which is pretty much life changing.

Contemporary Resort: The Contemporary Resort was built in 1971 so even though there are elements that feel like the Jetsons, keep in mind this hotel has been around for nearly 50 years and will probably still wow the pants off your kids when the monorail zooms through the middle of the lobby. The Contemporary Resort also touts a character dining breakfast, a high-end restaurant called Waves and an on-site gym in case you didn’t get in enough steps at the Parks (most people average over 20,000 a day).

Close, but No Monorail:

Disney’s Animal Kingdom Lodge: One of the most impressive Resorts near Walt Disney World is Disney’s Animal Kingdom Lodge. One step in the majestic lobby (built by legendary imaginer Joe Rohde) and you will have no doubt you are about to experience something special. This resort’s claim to fame is that each room includes a balcony, most of which directly overlook the savannah where giraffes, ostrich, zebra and over 200 species of animals and birds roam. If you or your littles are animal lovers, this resort makes you feel like you are staying on an African safari.

To maintain its theme, Disney’s Animal Kingdom also features African drummers in the lobby and two of my favorite African-inspired restaurants, Boma an African buffet, and Jiko, with an outstanding South African wine list and eclectic cuisine.

Animal Kingdom Lodge is sprawling in size, so ask for a room near the lobby if you want to cut back on your steps before you get to the park. That said, its size also offers an impressive pool and pool bar, small but mighty gym and spa (with great massages if you ever find yourself alone here on Valentine’s Day) and an adjoining Disney Vacation Club Resort, Kidani Village with another great restaurant, Sana. To get to the Parks, free buses are your only option here if you don’t opt to rent a car, which you really don’t need if you are staying at any Resort on Disney property. 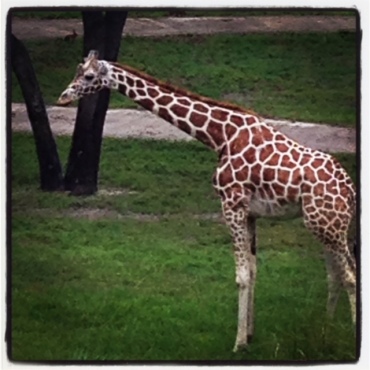 Pro Tip: Disney’s Magical Express: Save the cost and hassle of a car rental and take Disney’s complimentary transportation from Orlando airport to any Disney Resort.

Wilderness Resort: Wilderness Resort is another one of my favorite Resorts because the theming makes you feel like you’re staying at a lodge in Yellowstone, but you’re just a water taxi ride away from Magic Kingdom. A recent refurbishment added another pool, a beautiful outdoor restaurant called Geyser Point, another Disney Vacation Club Resort (great if you want a full kitchen, living room or space to sleep up to 12 people). 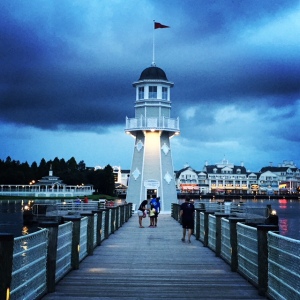 Beach Club/Yacht Club: These two sister resorts feature great pools (one with a sandy bottom), solid restaurants and are walking distance to EPCOT and Hollywood Studios. Beach Club and Yacht Club are both conveniently-located near the many restaurants on the Boardwalk and feature a few great restaurants like Yachtsman Steakhouse and a new quick-serve market with iced coffee (strangely hard to find at most Disney resorts)! It’s also one of Disney’s new dog-friendly hotels and is an ideal location if you are in town for EPCOT Food & Wine festival.

Boardwalk: If you want a bevy of restaurant and bar options within walking distance in a quaint setting, then Boardwalk is a great pick. One of my favorite dining spots on the Boardwalk is by far, Flying Fish, which boasts a recent décor and menu refresh that is on point. Like Beach Club and Yacht Club, it’s also a quick walk to EPCOT and offers boat transportation to Hollywood Studios and bus rides to the Magic Kingdom, plus an on-site Health Club.

Port Orleans: As much I love the city of New Orleans, I want to love this Resort but just don’t. When you are staying an extended amount of time or in my case, there for business, it doesn’t offer enough amenities like a health club or varied dining options. Also, the rooms all have windows that face out to a common motel-style walkway, so unless you aren’t someone that needs privacy, the blinds are closed in your room your entire stay. That said, it does offer some charming things like a great running trail and horse and carriage rides that fit the NOLA theme like beads at Mardi Gras.

To be transparent, these are my personal opinions of each of these resorts and Disney did not approve or endorse these reviews. That said, I am employed by an advertising agency who works directly for Disney so my opinions could be considered biased for all the right reasons. All caveats aside, have a magical day!

One thought on “Where to Stay in Walt Disney World: My Magical Opinion”

What do you think? I'd love to hear from you! Cancel reply

Wanderlust-filled working ad Mom, Susan lives in Chicago with her wife Julie and two daughters Aria and Luna. Susan is currently writing a memoir titled "Mother Me," her journey of becoming a Mother during the same year that she lost her own Mother as she knew her to a debilitating stroke.

To the guy who made me fall in love with the mountains, Jeeps, MSU, travel and horses. You danced with me at my Girl Scout dances as well as my wedding. We argued politics with the best of them and you pissed me off like a cranky old conservative should. But more than anything, you were like a Dad to me for 38 years. I’m so happy we talked on Father’s Day as well as the day you passed away. Butch, you shaped my life more than you know. Thank you for standing by my Mom through it all. I will stand by you forever.
Nothing better than picking Michigan strawberries with these sweet faces! 🍓🍓🍓
Happy pride from Gravel Lake! Such a beautiful full rainbow when we arrived today 🌈🌦🏳️‍🌈
One of our favorite weekends of the year is here, swipe right to see Luna’s happy sausage dance! 🌭🍺🇩🇪#maifest @lsrcc_chicago @dankhausgerman
Stumbling on new artists via street art is my fave @sentrock
Annual start of summer photo of the girls and another great Memorial Day filled with hot dogs, floats, boats and most of all wonderful people! 🌭🛟🍦